Ryan Hatton
←  back to Articles 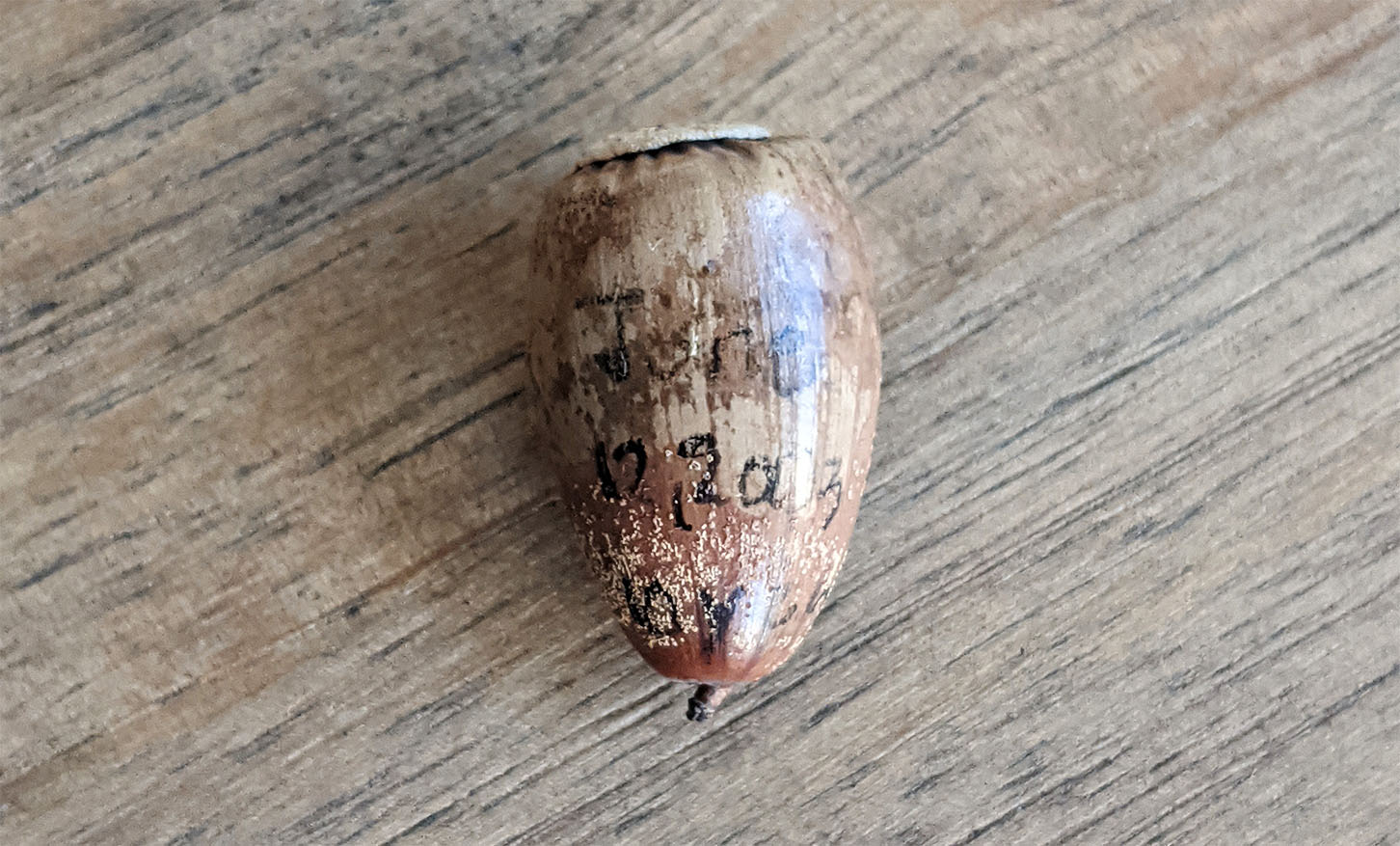 I’ve always had a thing for sentimental objects. Over the years, I amassed a collection of nostalgia-packed trinkets in a small metal box, nearly bursting at the seams. I recently dug through this container of items and stumbled across one of my earliest additions — an acorn.

I first picked up this acorn when I was ten. Summer break had begun, having completed 4th grade. I was officially an older kid. Practically a grown man minus some factors we’ll leave for anatomy class. Either way, it felt like a major milestone. I wrote down the date and my age to remember this pivotal moment.

I thought about my future self. What would I be like at 20 or 30? It felt a lifetime away. I imagined the older versions of my siblings and me — all the things we would experience and places we would live. It was disorientating but fun to speculate.

I asked a lot of questions:

Will I get over my fear of needles? (sorta, depends on the size)

Will I like tomatoes? (yes, but not by themselves)

Will I ever beat the evil pig boss, Wizpig, in Donkey Kong Racing? (no)

Will I like coffee? (yes, a little too much)

At the time, I lived on the mailbox studded streets of southern suburbia. Every day I prepared for a day of adventures, packing my oversized cargo-short pockets with Cheeze-Its and carefully stashing my slime green GameBoy into the heavily velcroed side pocket. It all fit.

I was with my first girlfriend, who lived right down the road. My girlfriend’s parents were strict and disliked me. Little snot-nosed boys were a distraction. And while my girlfriend honed her writing and math skills for a trajectory to ivy-league excellence, I recklessly biked the streets, enduring a stomach ache from a mix of flamin’ hot Cheetos, pocket Cheeze-Its, and worrisome quantities of chocolate milk.

Dating comprised of biking around the neighborhood and reluctantly sharing my stash of snacks. There was no kissing or other hanky panky, just playing games with our hyperactive imaginations on the grill-hot asphalt.

Now nearly 20 years ago, these memories are still vividly baked into my mind, all adhered to the acorn that serves as a bookmark for this previous chapter.

Time is an odd thing. Or, as Einstein describes it, “Time is an illusion.”

At ten, time was thick molasses. Days felt like weeks, seasons felt like years and years like decades. Time was hardly discernible for stretches longer than an episode of Spongebob Squarepants.

But now, time is deceptively quick, where memories start mixing chronologically. Things happened during that year instead of during that month. Even recollections of events become a dehydrated two-liner.

This phenomenon is due to an array of physical and mental factors[1]. However, one common theme is that new experiences play a role in the perception of time. When we are younger, there is so much to observe, absorb, and learn — time is consequently perceived as being slower. As we get older, we experience more, and hence there are fewer things we encounter as unique events.

Even though this acorn started as a little memento of my time at ten, now nearing 30, it feels like it has new significance as I reflect similarly on my future but with a different time lens. No, I’m not drawing the date down on an acorn this time but instead using this article to capture my thoughts—a digital acorn per se.

“If life is going to exist in a Universe of this size, then the one thing it cannot afford to have is a sense of proportion.”

― Douglas Adams, author of Hitchhiker’s Guide to the Galaxy

Did you enjoy this?

Then consider joining the Monday Mishmash newsletter! This is a short weekly email of interesting topics, products and articles I've come across during the week. You'll also be the first to hear about new articles, resources and projects going on. Sign up to receive the next edition! Never spam, unsubscribe anytime.

Thank you! Your submission has been received!
Oops! Something went wrong while submitting the form.
←  back to Articles